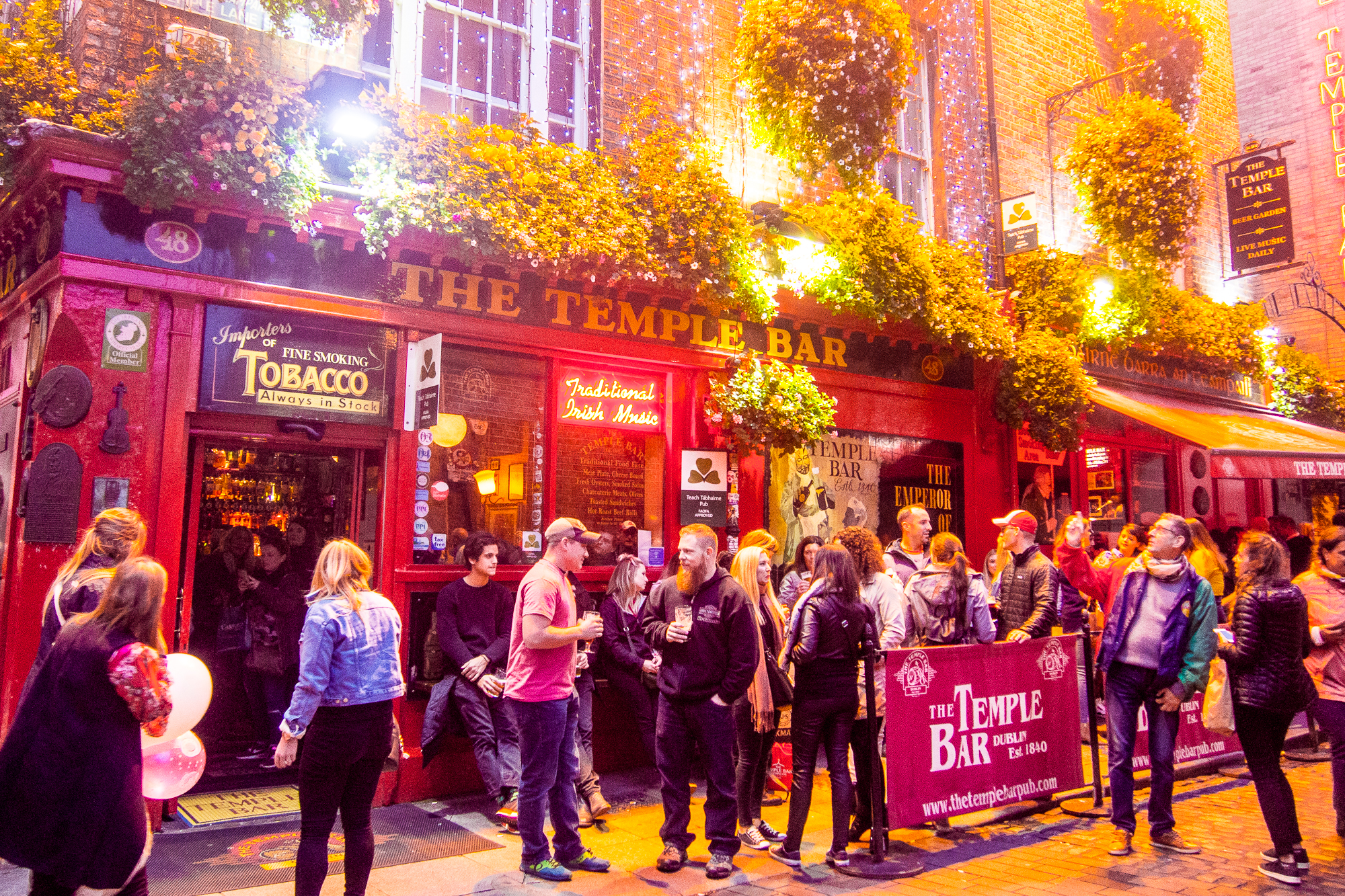 In the beginning of October me and my friend went on a short weekend to Dublin! None of us had been there before so we were excited to go. We only spent two nights there so we didn’t have enough time to see all it had to offer, but we had a really nice time. I didn’t bring my good camera, but was still able to document the trip. :)

We landed around 5 o’clock and caught the Airlink express to the city center. The bus stop is located just outside the arrival hall so it was very easy to find. You buy the tickets in a machine by the bus stop and it’s 7 euro one way. The bus was a double-decker and we were lucky to get the top front seat. After a quick stop at the hotel we went out and looked for a place to eat. The hotel had a good location in the middle of Temple bar district so we didn’t have to look far. We ended up at the Norseman Pub. Like many other places in this area they have a bar on the ground floor and a restaurant on the second floor. I ate an excellent burger! After dinner we headed to Temple Bar to drink some Guinness and enjoyed the night life of Dublin. The place was all full inside but they had an outside area where you could stand or sit and have a drink. We were actually a bit surprised that people were hanging out outside in October! Sunday morning we went out for breakfast. It was very empty in the streets and no cafés were open though, so we headed to Trinity College area and looked around for a bit. It was a beautiful campus with old buildings and we started remembering our own days studying at the university back home in Sweden.
We heard that in one of the buildings is the museum called the Book of Kells. It looks really cool, if you like books, but it wasn’t open when we passed by. We were getting hungry and headed south. There were many cafes that looked really nice but all of them were closed. Luckily we finally found a place that was open and looked fine. It was a big café and we had a great breakfast here. I would really recommend it if you’re there. They have a full Irish with eggs and bacon, sausages, bread and much more like yoghurt and croissants.

The food was very good. I liked the toast of good bread with mushrooms on it. And since it was a vacation I had to get a chocolate croissant too, it was awesome. The portions were very generous and we both got really full! The atmosphere was good and friendly. I will be back if I’m ever in Dublin again.

Full of energy we were all set to continue our sightseeing of Dublin. After breakfast we walked along Grafton street which is one of the main streets with many shops. We didn’t spend much time here but continued to the park, Stephen’s green. I always like to visit parks when I am in a city, but this one was a bit overrated in my opinion. After the park we just walked around which is the best thing to do when you’re in a new city. There are many churches and so on to visit in Dublin, but we didn’t want to spend time visiting them, so we only watched them from the outside. Even though I don’t like whiskey, we went to the Irish Whiskey museum. It lies in the crossing by Trinity University, I don’t think you will miss it. The entrance had some barrels with many different Whiskey brands. After the hallway with barrels you go up some stairs and reach the entry with a souvenir shop.

The museum is quite small but offers tours with tasting. We did a tour which was pretty good. We had a guide that guided us through three different rooms where we got to learn the origin of whiskey and how it is made and so on. The guide was very good and dedicated. The tour ended with a tasting of four Irish Whiskeys. I don’t know anything about Whiskey but it was still quite fun to try them. And I did notice a difference between them!

A very popular tourist attraction in Dublin is the Guinness storehouse. Dublin is the home of Guinness and therefore have a big museum with a souvenirshop and their own rooftop bar. There are so many people who want to visit this place that you have to book a ticket at a certain time. We hadn’t decided when to go and was thinking of just going there at a random time. But in the afternoon we were looking up their opening hours and saw there weren’t many spots left for a visit. So we booked a ticket online so we were guaranteed a spot. When we got to the Storehouse though we could get in at a earlier time, as long as we had a ticket.
It’s a pretty big building (7 stories) and we spent 3 hours here. The tour begins with rooms displaying the ingredients, water, malt, hops and yeast. After that you get to see different things from how it was exported in the old days, the founder Arthur Guinness and how Guinness has been advertised in history. Since everything is in an old fermentation plant that has been converted into a museum it is a pretty cool atmosphere in the building. After going through maybe half of the museum our tired feet needed a break, so we sat down at the café and shared a BIG piece of chocolate cake.

After the break we were ready for the beer tasting. It wasn’t really a “tasting” as we only got a small glass of Guinness and that was that.

After the beer tasting you walk through an area with old advertisement of Guinness. Guinness started in 1759, so there has been some over the years. And then we were finally at the top of the building in the bar called Gravity. This is where everybody ends their tour with having a complementary beer. From here you have a 360 degree view over Dublin. It was a bit cloudy and misty when we were there so we could only see the contours of the mountains. I can only imagine the view from here on a clear day. This was of course the highlight of the tour, both because of the beer and the view. There were a lot of people though, but we were lucky to get a seat, many people were standing. So it was time for dinner again and we had to pick a place to eat. There are actually Irish pubs with live music everywhere in Temple bar area. It is pretty hard to choose where to eat because every place looks really good. We walked around in Temple Bar, and chose a very nice pub. The place was almost full but we managed to get a table on the ground floor in the pub area. They had like many others a great live band. It was hard to pick both food and beer so we ordered some small courses and tried their beer tasting. We got to choose six different beers, three light and three dark, from their own brewery. Great beer and a very nice pub! And so the next day it was time to go home again. We headed over the river to the north side which doesn’t seem to have that much to offer? Well, we had some breakfast at a nice ecological place and walked around for a bit along the river before we caught the Airlink express back to the airport. The Spire of Dublin, a 120 meters high monument of stainless steal located in the middle of O’Connell Street. When you stand at the bottom of it and look up you can get a bit dizzy… You have time for more than you think in less than 48 hours. :)

1 thought on “Weekend in Dublin”

My name is Emilie, but have a nickname that is Knutte. Therefore Travels by Knutte.

I’m from Sweden and love to travel on my free time. Other than that I like to combine my interest in photography with travelling.

In this blog you’ll find photos from my travels that I do both with friends and solo. I do many kind of travels; to bigger cities, beaches and mountains. Although being out in the nature beats most things. You will most likely see a photo of a nice view in every blog post. :)

🇬🇧 Have you visited Greece? Where did you go

🇬🇧 I got lost a couple of times strolling th

🇬🇧👋 Hello there! Wanted to thank all 500

🇬🇧 From the old bell tower in Skiáthos you

🇬🇧 The view from my hotel room on Skiáthos

This morning my phone reminded me that I was in Co